Market leadership in PSA/VPSA by installations

Airox Technologies Limited has proved market leadership in PSA/VPSA by installing and running successfully more than 100 PSA oxygen generators in India. Airox in collaboration with AirSep Corporation, USA which the world leader in Vacuum Pressure Swing Adsorption (VPSA) & Pressure Swing Adsorption (PSA) technology which has 25 years of experience in the design and manufacture of onsite PSA/VPSAOxygen Generation Systems. Each system is custom engineered for the end-user's specific site and process requirements.

All AirSep PSA/VPSA oxygen systems are optimized for peak efficiency, low power consumption, high reliability with an expected on-stream efficiency of 99%, and an expected equipment life of +20 years. All system designs are highly integrated into skids to minimize footprint size, and simplify on-site installation.

AirSep VPSA Oxygen Systems are currently in use all over the world in remote, harsh, and/or demanding environments. 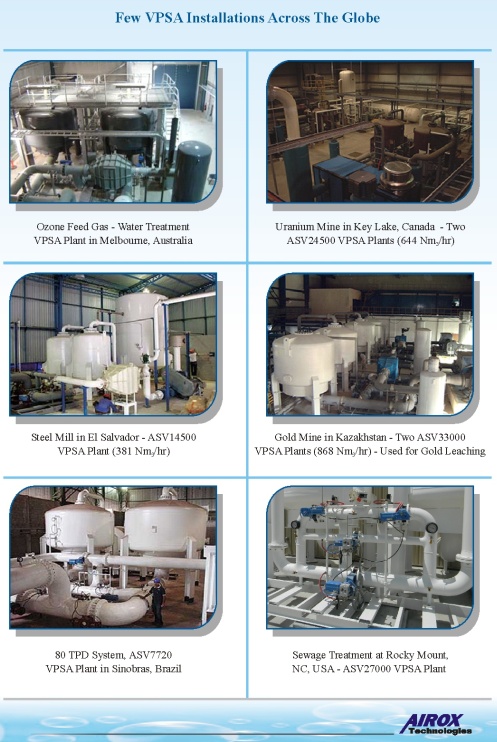 The Rocky Mount AirSep VPSA Oxygen Generation System has been Selected to Receive an Award at the ACEC/NC Engineering Excellence Awards.

RALEIGH, N.C. – The Wooten Company, one of the most reputable engineering, planning and architectural firms in North Carolina, has received notification from the North Carolina Chapter of the American Council of Engineering Companies (ACEC/NC) that the firm has received the 2013 Engineering Excellence Award for demonstrating the highest degree of achievement, value and ingenuity in design of the Rocky Mount Oxygen Generation System.

This award was presented to The Wooten Company because of their ability to collaborate with the City of Rocky Mount, state agencies, sub consultants and equipment vendors in addressing the replacement of the obsolete and highly energy inefficient cryogenic oxygen generation plant, performing a critical function in the City’s Water Reclamation Facility, with an alternative system customized to needs of Rocky Mount.

“The new VPSAsystem is costing us only $345/day for electricity, compared to over $1000/day with the cryo plant,” said Kirk Bass, superintendent of wastewater treatment.